Why I Fell in Love With Laughter Yoga 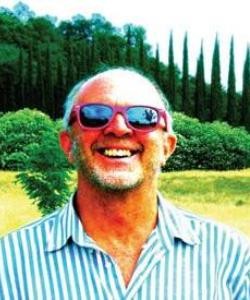 I was first introduced to Laughter Yoga when I screened the film “Laughing Clubs of India,” at a short film Festival. The seed was planted. I recall laughing hysterically when the workers in blue uniforms got in a circle, looking quite somber and then they performed a simple stretch from bending low to lifting their arms high. When their arms reached high, for no apparent reason whatsoever, they all laughed loudly to my utter astonishment and glee. I loved seeing the part where the Indians gathered in various parks and did all sorts of silly exercises and laugh with cheery smiles on their faces. I too love to laugh.

At the time I was not ready to pursue it. I was already enmeshed in activities designed to “change the world” so I left the laughter alone. Shortly after, however, I came across a six minute short film called “Bodhisattva in Metro.” That film blew me away. It wasn’t a documentary but a professional film depicting quite deliciously how one man’s smiling turned to subtle giggling to simple laughter, eventually to uproarious laughter whereby infecting the entire train load of normal looking humans.

Even though it was a foreign film it didn’t matter since laughter is a universal language and I recall being wonderfully stunned. I almost started to cry seeing how one man could change everyone on that bus by not engaging with reasonable intellect for a particular cause or whatever, but simply inciting an entire train of passengers to laugh their asses off — no comedy, no jokes, no laughing at people but simply infectious human laughter.

That initial seed was now sprouting.

I always had fantasies about being a comedian decades ago because I felt the incredible high that I imagined comedians would feel when they offered a joke to the world where people responded with gusto laughter. How could that possibly compare to money or fame or applause or good ratings? At that time I think I saw another YouTube video where famed actor/comedian John Cleese and the BBC went to Mumbai India to learn firsthand about the Laughter Yoga clubs. That short report clenched my decision. Not only his words of “wonderfully ridiculous” and a “force for democracy” to describe Laughter Yoga but something inside me reached a level for me to go the next step. How cool would it be to feel what the comedian may feel but without all the silly jokes!?

Near the same time I recall spontaneously walking into a yoga studio and asked the owner if she had heard of Laughter Yoga. She said, “Yes. You’re the second person this week who has asked.” She mentioned that she had inquired about Laughter Yoga instructors in our area and there were none. So, that night I googled and searched for a nearby training workshop. Lo and behold a weekend workshop was happening in Los Angeles a few weeks down the road. I signed up, paid my money, and almost collapsed.

During the first few hours in Sebastian Gentry’s class (at the American School of Laughter) I was so thrilled that laughter could be such excellent medicine. Not only did I feel wonderful but my mind seemed to be so overjoyed because the laughing was overwhelming my usual judgmental and needing-to-understand mental framework.
I just laughed and laughed. Remember, up to this point I had never experienced a session before so all of this was brand new to me. The words in my laughter mind kept saying, “You can do this!” And, thus, I became hooked… and got certified!

Forty hours of Laughter Yoga sessions later I wanted more training so I signed up for a five day workshop with the founder himself Dr. Kataria in Chicago.

The training was amazing, challenging, ego-busting, thrilling, intoxicating and fun. To be with so many supportive people to continue learning and fine-tuning our skills and to be in the presence of a calm doctor who thankfully listened to his call “from above” to pursue laughter clubs in 1995, I am thrilled. I am overjoyed with gratitude that a practice is now in place.

Here was a simple method for joy, what I yearned for in decades. To see faking laughter move into genuine laughter is so simple. To know that the body doesn’t know the difference is outrageous. After decades of various forms of therapy and spiritual disciplines (which probably all lead me to laughter: hahahha), I finally discovered a very simple and elegant way to joy. Not only joy but acceptance of myself and others to know and to feel that the world is indeed a beautiful place and that I don’t need to change it. I actually have a choice to respond to many situations with laughter/joy rather than the seemingly inevitable response of misery and irritation. As the Dr. says, “When you laugh, you change, and when you change, the world changes with you.” When my judgments of people decrease I no longer see people who are in need of change but I see people who are beautiful and doing the best with what they have, just like me… and suddenly the world changes! Hahahahah.