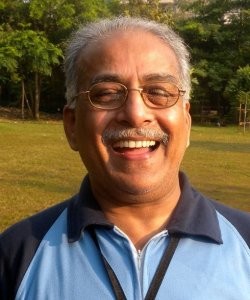 In the year 1995, Ramgopal moved to Mumbai, where the First Laughter Club was born. For the first couple of years, Ramgopal continued with his early morning walk as his routine activity. This routine gave him freshness to carry the day forward.

Ramgopal joined the Laughter Club when one started in his neighbourhood. Since then he has been a regular and is now a Certified Laughter Yoga Leader. He says,”the Laughter Club is like a well knit group of individuals where we acknowledge each other at all times, practice pranayama, exercise and also sing and dance in one large group.

He feels that the given the nature of his job there are daily situations that are stress-inducing. But with the practice of Laughter Yoga each morning for more than a decade, Ramgopal says, “Nothing disturbs him discreetly.” He adds that with such continuous practice, he is able to see many situations clearly and has now developed a perspective that is issue-based rather than personality-based. These are benefits of Laughter Yoga that Ramgopal vouches, has had on his professional life.

“The success of Laughter Yoga is mainly that we laugh together, greet each other as one well knit family. Laughter Yoga is not a religious, political group and above economic divisions as well. We have many celebrations together.”

Ramgopal makes it a point to sign off all overseas emails with “Ho ho ha ha “and “regards”.