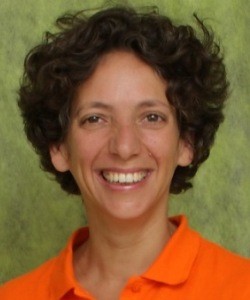 Portugal has been known as the ‘land of sadness’ for a long time and people found it difficult to laugh. But today, it is a perfect example of how Laughter Yoga can change attitude and even culture. It was introduced in 2004, but was faced with a very hard start and a reluctant community. Gradually, the dam of centuries of repression exploded and a tidal wave of laughter came pouring out. I’ve never seen anything like this! All you need to say is: You can laugh now. And the catharsis begins.

A clown by profession, I had been suffering from years of pent up pain when I stumbled across this marvelous way of self healing and managed to recover from a crippling disease in my joints. Though I had got the ball rolling; Laughter Yoga in Portugal took off only after I married my laughter student, Jörg Helms and together we founded an association and created a school for Laughter Yoga.

After spending 30 years of making others laugh (I began my career as a clown at the age of 5) I swapped the red nose for the hearty laugh and in doing so, turned my life into ‘Nirvana’ and realized that I had helped more people to laugh with Laughter Yoga, than I had ever done as a clown.

Presently, there are more than 300 laughter leaders in Portugal and many earn their living exclusively through laughter, but even more are giving their service by bringing laughter into old people’s homes, prisons, hospitals etc. Every one in this country now knows about Laughter Yoga and we have only just got started!

The saddest people are healing and coming together. People feel that life makes more sense now. Some of our students are so inspired and motivated that they drop their entire existence and dedicate their lives to laughter! In fact, a Maths teacher in one of our courses said she didn’t want to teach Maths anymore; instead she wanted to teach laughter!