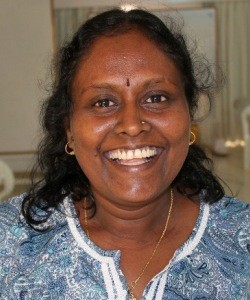 Since the last two decades, I have been training people from all walks of life in different areas like Health &Safety, Reproductive Health, Human rights etc. But, after some point of time, it started feeling monotonous and I wanted to give myself a break.

In December, 2010, my brother saw a poster of Laugher Yoga leader training being conducted at Tiruvannamalai and insisted that I attend the training. I was very reluctant, but he was keen to put me in. The first day when he dropped me at the venue, I told him that if I get out immediately he should not blame me because according to me “Laughing without a reason” was a ridiculous idea and I was certainly not convinced.

The training started and the “magic” happened. I got completely involved in this unique concept, where anyone can laugh without relying on any joke, humor or comedy. During lunch break, I came out to meet my brother who was waiting to pick me up. On seeing him, I started laughing and very curiously he also joined me. I narrated each and every exercise to him and his fiancé and they both decided to attend the next leader training. On 7th of Feb 2011, my brother got married and soon after the rituals, the newlyweds and I went to the Laughter Club and the members surprised us with a grand Laughter reception! Very inspired and motivated, I took up Laughter Yoga as a career and am now helping others to bring more laughter and joy in their lives.