My Journey With Laughter Yoga 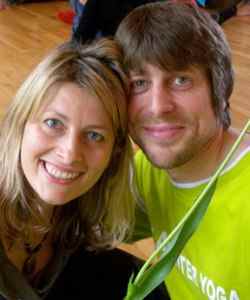 This story shows different aspects of my life; before and after my Laughter Yoga journey. Since an early age, I was a little aloof and had an occasional pattern of waking in the night amongst horrific deliriums that left me scared beyond belief. After a difficult parental divorce, I had a fairly normal childhood until before high school, when I began using substances as a form of escape and peer group acceptance. This drug use continued until my mid – twenties.

After high school, I began college and once again the drug abuse caught up with me and sent me into a psychosis, resulting in hospitalization and two years of strong medication. When the medication finished, I began slipping back into the insane thought and behavior patterns to hide from feelings of disturbances and fear. This time I ended up in a car wreck. Comatose and half dead, I awoke and underwent a lengthy rehabilitation process.

Though the affects of the head injury are still there, life is really looking up, especially since I started Laughter Yoga. Now, I start my day with laughter exercises including pranayama, crossover nasal breathing, deep belly breathing, and also humming and visualization meditation. Recently, I went to the local Buddhist retreat center, met some laughter buddies and decided to set up a new social Laughter Yoga club in the nearby Scottish town.

Originally, it was my mother who introduced me to Laughter Yoga at a friend’s birthday party. We did an hour session before going out for a meal and I was completely sold by the concept. It was an amazing night! Any tensions that I felt at the start of the evening were blown away into laughter freedom. My inner child was awakened, and I laughed like never before. I felt free and it had been a long time since my heart was touched like this.

After just one session, I did the two day leader training, after which I went to my friend’s mediation class and asked him if I do Laughter Yoga with his students. He agreed to 5 minutes and people loved it. The next day we did 35 minutes. This was certainly a great way to kick off my Laughter Yoga career. I offered Laughter Yoga to groups of friends, community groups and passersby. The job center set me up with a small business advisor in order to make a living from this new found work. I later did the 5 day teacher training in Switzerland which gave me an extended family of fellow students and the feeling is incredible. Laughter Yoga helped me find my inner play again. It is so great, not being so serious all the time—‘just laugh’.