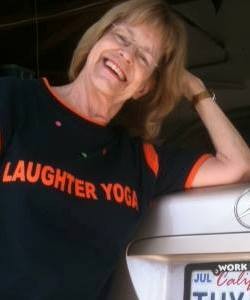 On July 7, 2007, I celebrated my 67th birthday and three months of my heart transplant. I had a great party with friends and family who supported me through my new heart adventure! Did I mention I received my new heart on April Fools Day? It fits my personality perfectly ha ha!

My medical situation suddenly changed in a few days in 2004. I went from no symptoms of heart disease to a heart transplant. I had a clean bill of health after my annual physical, and I asked if I could have even have a treadmill stress test just to have a more complete health picture. “Why? You are my healthiest patient”, I was told. But, the test was done a few days later and I was told to stay in the hospital overnight. The test information led to more tests. It was determined that I had already had a silent heart attack. Three or more arteries were blocked 70, 80, or 90 %.

Bypass surgery was scheduled. One of the bypasses was hyper clotted, so they did another one. Very soon all the bypasses shut down due to a reverse reaction to one of the medicines they had to use. I was sent back to the OR to have 7 stents put in and was in the ICU for nine and a half weeks with one complication after another. My son was told that I may spend the rest of my life going from bed to chair and back, but I’m relieved that he did not tell me.

After a year of slow recovery, I knew I needed to do more than walking and eating correctly. I needed medicine with no bad side effects for my spirit. I heard something about laughter groups and soon went to join a laughter club. After one session, I knew I had found what I was looking for. It was then Laughter Yoga entered my life. Laughing hard for health is different from intermittent laughing at a joke or a funny action. Seriously laughing quickly moved to silliness and playfulness for me.

I was a person who had a weak self esteem which led to a lot of repressed hostility. I needed to laugh for the shear JOY of it. No matter how I felt going into a Laughter Yoga session, I always came out with a lighter spirit and feeling of self confidence which showed in my new interactions with people. My sense of joy led to less notice of pain, more regular exercising and an influx of new friends who have positive outlooks and often laugh at themselves and funny situations.

While my heart continued to weaken, my spirit grew stronger. With CHF I had terrible days with fluid buildup. On the day that I meekly asked my doctor if I would be eligible for a Handicapped Parking placard, he gently told me that I would benefit from having a heart transplant. “What? You must think I’m really sick. That hadn’t occurred to me”.
I had so many complications in 2004, I looked forward to the transplant with nervousness, excitement and complete confidence in my transplant team. The first outing after leaving the hospital was to go with my daughter and grandchildren to my laughter session.

I became a Laughter Yoga leader in 2009. Right away I got a vision of what I would do with my Laughter Yoga training. I am starting a nonprofit organization, working with groups of volunteers to become an extended family to the healthcare facility of their choice. My project is in honor of my heart donor and her family. My doctors say I did so well because of my “Gratitude Attitude”. I say that came from my experience with Laughter Yoga.

My project called Linking Laughing Hearts offers music, movement and laughter to patients who spend many weeks in their beds or wheelchairs. The exercising with music and laughter, the socializing, the eyes and physical contact benefit me as much as they do the patients. One other unexpected gift I got from enjoying Laughter Yoga is looking younger. Laughter Yoga really reverses aging. A 52 year old woman asked me at the Senior Center, “Are you a senior?” I told her I will be 70 in July 2010. She didn’t believe me and proceeded to look closely at my hair. “There’s no grey!” I said that I was probably all grey, “I paid for this color!” ha ha ha