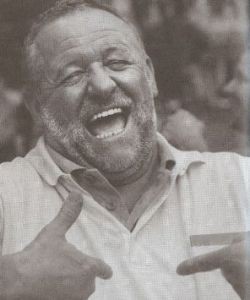 As long as I can remember I have been a very shy person. During my life I worked a lot on this problem, but never seemed to overcome it as I was afraid of people.

In October 2006, I entered a Laughter Yoga club for the first time in Ghent and met laughter leader Luc. I felt immediately at home and the experience of laughing freely was amazing. I wanted more. Unfortunately, the Laughter Yoga club was only once a month which was not enough for me. I needed more of that magic potion called laughter which made me feel so alive.

I started visiting other clubs in the neighborhood. It gave me the chance to laugh at least once a week. I discovered different approaches of different leaders and Laughter Yoga became my favorite hobby. In fact, at times, I put everything aside – sometimes literally – for this breathtaking experience.

In July 2007, I entered the Laughter Boat organized by Luc and others. It was an amazing experience. I decided to come back the next day, and the next, and next! Eight days in a row I enjoyed the liberating power of laughter. I shall never forget the energetic feeling I had after those eight wonderful days.

Intrigued by this great concept, I decided to take a course in Laughter Yoga, and just a few weeks later, friend and laughter coach Ben De Cock told me that there was an opportunity for a Laughter Yoga club in Deinze. It took the chance of a lifetime and transformed from participator to Laughter Yoga leader.

Since then a lot has happened. I became a laughter coach and gave Laughter Yoga to numerous audiences. I started to sing, I started to dance – I started to live! Thanks to Laughter Yoga I discovered that I was not a shy, introvert person. Instead, I was an extrovert stuck in a shy mind. Laughter Yoga helped to remove years of shyness, leaving the doors open for expression.

In 2008, I joined Luc at the Laughter Boat as a Laughter Yoga leader and since then, the Laughter Boat and the ‘Gentse Feesten’ (A music and theatre festival in the city of Ghent, Belgium) is the most magical moment of the year. My club in Deinze sadly closed, but I’m still active in Ghent and give sessions to lots of different people – companies, elderly, schools, disabled persons etc.

In 2009, I started another course called ‘Creative Agogic Work’ together with Luc. It was a two year course to explore the boundaries of creative sessions (like Laughter Yoga for example). In 2010, after we successfully graduated the course, I decided to change my job as after ten years of ICT it was time for a change. In January this year, I started to work as an educator for people with a mental disability. One of our principal themes is the equality of every human being, disabled or not. Within my organization I am fairly known for my positive attitude and the ability to stay positive in difficult stress situations.

Last year in 2010, I visited India together with my partner Eva and this year we went to Thailand. Both of us were impressed by the simplicity of a mere smile, which was so omnipresent. We came back with the idea that although in Belgium materially we have no issues, emotionally we have become very serious and weak. From our travels we had learned that a person with a true smile can make a real difference.

When I look back at those five years, it has been the most intense years of my life. All this thanks to Laughter Yoga, thanks to my close friend Luc who introduced and supported me as a mentor and buddy, thanks to the Laughter Boat experience which taught me you can never laugh too much. And thanks to the many friends I got to know because of the simple but amazing power of laughter.