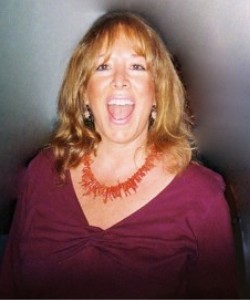 My mother always said that her two children had very hardy laughs. While my brother became an investment banker, I had to find something else to fall back on.As a recovering class clown, and a former talent agent and casting associate, who worked with lots of comedians and actors I was always for all things laughter related. However, my laughter story came full circle when nine years ago; I came across a flyer, for a workshop in which a Medical Doctor from India was coming to NYC to do a training based on a technique he created called Laughter Yoga. The flyer mentioned that Laughter Yoga was not based on humor.

Curious and very intrigued, I took the training with Dr. Kataria and became certified. A few years ago, I started a laughter club here in NYC.

Laughter Yoga has completely transformed my life. Personally it has proven to be the most effective form of therapy unlike any other I’d experienced. The positive results are immediate and have had real longevity and staying power. Laughter Yoga has infiltrated my life and moves way beyond the cardiovascular exercises which can be rigorous and yet, ultimately exhilarating. Yogic Laughter has given me permission to laugh in the face of adversity, trust my instincts and become downright playful. And, I passionately share my mantra with others who have walked through the Laughter Yoga Looking Glass!

Two years ago, I lost my full time job after working at a non-profit agency while running a care-giving program and working with seniors. I had been immersed in this community for six years and loved the work I was doing, so was devastated when my department downsized. I always integrated Laughter Yoga in my groups with my seniors, caregivers and clients with Alzheimer’s Dementia and at times in my counseling sessions, past and present.

Becoming one of the most popular and effective groups I have administrated, Laughter Yoga is transformative in so many ways. I even had the opportunity to present Laughter Yoga at the ASA conference on aging in Washington D.C.

Laughter Yoga has helped me tremendously in coping with losses and depression. Not to say that I don’t still get depressed or feel sad but I honestly can’t imagine how I would have coped during these rough times without it.

My work through Laughter Yoga has also accessed and touched a place in me which has made it easier to induce my own tears. And as a result, I cry more often which is a good thing, because those tears were often suppressed!

For the last eight years, I’ve been facilitating groups. Some of my Laughter Yoga workshops are upwards of hundred’s of people, and because of practicing Laughter Yoga, I’ve gained the confidence to lead these large groups.

As a result of the economic downturn, I’ve been very busy leading these Laughter Yoga wellness workshops and events. Corporations and hospitals are calling to say, “We need you!”

I feel a great sense of satisfaction in helping others, while observing their energetic transformations through yogic laughter.

And, the Laughter Yoga clubs also serve as a social glue, they elevate the collective consciousness and I have developed several close friends and many connections by laughing with these people. Imagine, just by simply laughing with others friendships ensue…WOW…what a concept!

And lastly, as a very curvy and full figured woman, I am one who has always struggled with food and related body image issues. Before Laughter Yoga became a part of my life I hadn’t dated in several years. When I began practicing LY, it had a transformative effect, providing energy, positive body imagery, and a boost of self esteem which led to some positive and impressive results. As a result of practicing Laughter Yoga, I felt very confident and immediately started dating again. It has helped me with my body image, and I am passionate about sharing this part of my journey with others.