Laughter Yoga Brought Back Joy In My Life 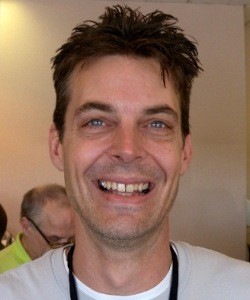 I grew up in Houston, Texas in a middle class family and was mostly surrounded by hardworking and good people. As a kid, my brother and I would make up crazy games to play, have a mud fight, or play with the neighborhood kids. We would laugh like it was the last time we would ever get the chance. As time went on, we grew older, started going to school, and making other friends, laughter became a less frequent occurrence in our home. We needed to be more serious as responsibilities grew larger. Soon the spontaneity of play had stopped and we only laughed either while watching funny films at home or at some joke. Childlike play was out, and laughter lasted only a few seconds before it was time to move on to more serious things.

Upon leaving High School at the age of 18, I immediately enrolled in an automotive school and six months later was working in a dealership in Houston, TX as a mechanic. Later, I went into more serious work in Military Intelligence. After that I became a Private Investigator investigating deaths for life insurance companies. By then, I had obtained responsibility, made enough money, was married, but there was something missing. My life felt flat and my emotional intelligence was not up to par with my public education. I had forgotten the feeling of joy – though for sometime it was replaced by happiness, but gradually that too was lost as it was fleeting.

Luckily, a wonderful friend introduced me to Laughter Yoga, and I started, slowly, to remember what joy was. Now! I am 42 years old and have made up ten fold for the laughter I had lost. Let me tell you how that happened. I was burned out on Private investigation work and started mowing the neighbors’ lawns to keep my sanity and make some well-needed money. I was working for a friend of a friend who came over to pay me one day, and as usual we would sit and talk a little. She said she was doing something called Laughter Yoga, and I felt embarrassed for her. Like when someone says they practice voodoo or remote viewing without a remote control. But as I liked her, I sat and listened some more. A little later she led us through some quick Laughter Yoga exercises and asked us to attend a Laughter Yoga gathering at the local Farmer’s Market. Though a little apprehensive, I decided to go for the Laughter Yoga session.

Shy at first, but after a while looking at the others, I started to laugh – Really laugh. Some of the strangers looked over their shoulders and laughed immediately, as if on cue, at nothing but other people laughing. They just joined in as if we all had heard the same best joke in the world. So much was going on I thought I might pass out. I was laughing, in front of strangers, FOR NO REASON! And I thought I felt something familiar. It was Joy.

When it was all over, the place was vibrating. I was talking faster, buzzing, smiling, and laughing. I was unable to stop doing Laughter yoga from that point on, even though I tried to convince myself that it was just nonsense. I did not want to stop. I wanted more. My wife and I started using Laughter Yoga in our lives on a daily basis, and discovered that with a little laughter, big deals are no longer big deals. We talk more freely, laugh more freely, we sing and play music more and we feel real joy together. Now, we are both Certified Laughter Leaders and Trainers and are committed to spread this wonderful experience to others.