I Became a Happier, More Balanced Person Through Laughter Yoga 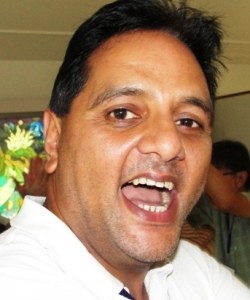 I found myself participating in and then leading my first Laughter Yoga session quite by accident a few years ago. It was all triggered by a serious sporting injury which kept me out of action for nearly 4 months. But the story really starts more than a decade before that. While visiting relatives in Nasik, near my hometown Mumbai, I was woken very early one morning by some strange sounds coming from the open space opposite the bungalow. A group of least thirty senior citizens were miming strange actions and expressions, cackling with what sounded like orchestrated laughter and breaking frequently into rhythmic applause, all with loud, vocal sound effects. They seemed to be having a wonderful time and I remember watching and listening in bewilderment and surprised delight for a good 5 minutes or so before going back to sleep. The memory of what I saw and heard that morning stayed deeply stored for many years until the right trigger came along and allowed it to re-enter my consciousness and take hold of an important part of my life.

Eleven years later, in London, I tumbled whilst playing football in a park and my foot twisted in a very unnatural position. The thinner of the two long bones in my lower leg also snapped. It was a scary sight. It was only after a midnight emergency operation involving the insertion of a metal plate, several screws and a few pins to repair the ankle and fix the leg bone, and 3 – 4 months of intense physiotherapy and rehabilitation that I regained 95% mobility on that foot, albeit with a plate and some screws still inside.

During the subsequent days, weeks and months of recovery, I couldn’t help reflecting that there must be too many imbalances in my life for such a simple fall to have such serious consequences. This was an urgent wake-up call and opportunity to stop, think and rethink my life. I decided to make many significant changes to achieve a healthier balance, to become a happier me… including abandoning the safety of a senior international role in a large multinational organisation to start my own boutique management consulting practice.

As part of my rehab, I joined some yoga classes and got involved in a variety of yogic activities and meditation. It was here that someone mentioned Laughter Yoga, which stirred the long-dormant memory. I read everything I could about Laughter Yoga and also watched some YouTube clips. I attended a public laughter session to learn more. Believe me, after that there was no turning back; I hooked! It was so much fun – I felt great afterwards and the good feeling lasted for days! One day, I had the opportunity to conduct a laughter session myself as the laughter leader was unavailable. It was a huge success and there was demand for more. I gradually became known as ‘Yogi Dada’ – the travelling Laughter Yogi (Dada means big brother in my language, Marathi, and it’s how I’m known in my family).

These days I split my time between London and Mumbai and in addition to participating in established Laughter Club meetings when I can, I try to spread the joy and benefits of laughter games and simple meditations through specially organised sessions for younger professionals and college students in particular – current and future opinion formers and shapers. And now, as a Laughter Yoga teacher who has qualified under the guidance of Dr Kataria, I seek students who will help increase the spread of this gift to those who might otherwise be too busy or otherwise distracted to stumble across it, as I was for so many years.