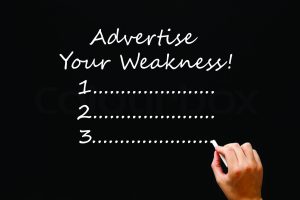 Every person has a fair share of strengths and weaknesses, but very few have the courage to talk about their weaknesses. It is understandably difficult to open up and admit to ones faults and try to rectify them. Sometimes, we go through our entire life hiding our weaknesses, which most often is detrimental for our self esteem. Therefore, it is important to primarily accept our faults and then set out to fix them.

Here is an interesting story that reveals a great way of getting rid of your weakness or any bad habits by actually telling others about it:

Long back in the early 90s, when I was practicing medicine in Mumbai, one of my patients was a chain smoker. He had tried almost every method in the book to try and get rid of his habit, but it was of no use. Rather dejected, he came to me and asked me for help. Knowing his weakness and his inability to stand by his conviction, I told him that instead of trying to quit smoking, start telling other people about the adverse effects of smoking. At first, he was extremely perplexed, but better sense prevailed and he decided to trust my belief in the new approach. He sincerely got down to the job of preaching people and explicitly telling them about the dangers of smoking and how it affects ones life. He became very adept at doing this, but gradually started feeling guilty about not practicing what he was preaching. This was a wakeup call and he immediately took a decision to quit smoking. But he continued to tell people about its menacing effects.

My strategy worked. Since then he never lit another cigarette, instead his life was lit with better health and ahis own r sense of fulfillment of esolution and determination. Thats what happens when you start advertising your weakness  it actually leads to you tossing it out of life.

I also want to share with you an experience during my Spiritual Retreat with a group of Japanese participants in February, 2014. Normally, after giving an orientation in the morning, the group goes into a period of silence during which they are asked to contemplate and write down whatever comes to their minds. Later, in the evening there is a dialogue program and each one is asked to share their experiences and feelings. This time I asked them to write about five strengths and five weaknesses. As, I had to go to Delhi after the orientation, I asked my wife Madhuri to coordinate the dialogue program.

Knowing the fact that most people are very conservative about talking about their negative qualities with other people, I asked her to tell them to first come out with their strong points, and then give them an option to share their weaknesses if they wanted to. But, contrary to our expectation most participants were willing to openly discuss their failings.

I know that it is not easy to brag about your strengths or come out with your weaknesses, but sometimes when listening to other people, you get insights which strike an inner chord. This is called parallel learning, and it helps you to open up. And this is exactly what happened. Everyone loosened up on seeing others talk about themselves, and by the end they were all discussing their different traits and qualities. In fact, most agreed that if you want to get rid of your weaknesses, you must not hide them or go into a denial phase, because then unconsciously you think that the problem does not exist and that you cannot do anything about it. Personally, I found this philosophy very helpful to get over your weaknesses

Weakness generally pertains to acts of omission and commission. It is seen that people fail to perform an act which they should do, and actually land up doing something that causes harm. This clearly indicates that people are quite unaware of their strengths. They do not know that their life is running on these positive traits, and are unable to acknowledge them in public. This also could be because they feel that if they talk about it, people might think they are boasting or bragging. This holds them back and they prefer to be oblivious of them.
In fact, during the retreat when I asked the participants to talk about their strong points, they all fumbled and started pondering. This is where I asked them to contemplate in silence and take their time to think about their traits, both and bad. I realized that it became much easier for them to come out and talk about themselves after a long and thoughtful period of silence and as compared to strengths people were more aware about their weakness.

Learn To Use Your Ego Mind To Your Advantage

It is the ego mind that allows people to impress upon others and seek their credits and approvals. But keep in mind that there is a thin line between self- esteem and ego. On one hand ego helps you to uphold your point of view and making it easier for you to follow what you tell other people. On the other hand, it can make you self centered as it feeds on selfish agenda and I, me and my alone.

Let me explain this. When one gets appreciated and acknowledged for their good work it is self esteem not ego, but when in order to get the limelight we start harming other people, talking negative about them and putting them down, it is the negative aspect of ego.

Looking back at my own life, I too had fallen prey to the egoistic side of my mind. I used to brag about myself to my friends to impress upon them and seek their appreciation. But all the time I knew that most of what I said was not true. However, I could not bring myself to rise above my ego. It stopped me from accepting my weakness and admitting my faults in front of people. It took many years of introspection, understanding and thoughtful perception that led me to realize the difference between enhancing your self-worth by true admittance and succumbing to the falsities of your ego.

You should be able to evaluate and judge your own self worthiness and have the confidence in your own self. A high self esteem will help you feel good and will allow you to gracefully accept if you have any wrong somewhere; whereas a person with ego will try to defend himself even if he gets to know he is wrong.

Remember, ego is an inflated sense of self-worth. It is an immature state of self esteem that lacks the capacity to acknowledge the opportunity to overcome a mistake. Therefore, you should try and strike a balance between using your ego mind just enough to maintain your standpoint, but not becoming egocentric.

Coming back to revealing your weaknesses, I once again reiterate that advertising them and openly accepting them is the only way to get rid of them. The right amount of ego and feelings of self-worth will help you in advertising and telling people not only about your weakness, but also what efforts you are making to get over it. This is very important as it works like a self check. Once you openly talk about your ways of getting over your negative traits, it becomes simple to admit to your faults, rectify them and utilize the strengths to the fullest.
Another thing to remember is to always talk to someone who is very close to you and not just anyone, because only those who are your well wishers and genuinely care for you will be able to understand your problem and help you to overcome it.

Use the above knowledge to understand that admitting to your faults is not undermining your self-esteem; instead it will help you to enhance it and give you an inner satisfaction of being truthful and honest to yourself. So, always be ready to reveal your weaknesses as well as your strengths as it will ultimately make you a better person with a stronger willpower and greater resolution.